Fireside – Not Just Another Conference

Home UncategorizedFireside – Not Just Another Conference

Fireside – Not Just Another Conference

Earlier this month, we were lucky to be invited to participate at Fireside Conference. Pauline Petri, our Chief Sales Officer, and Sharon Sehdev, our VP of Sales, had a blast – so not typical for a conference. Well, that’s because Fireside was unlike any other conference that we have been to.

In its third year, the immersive, off-the-grid and off-the-record cottage weekend featuring the brightest minds in business, startup, investor and media communities, was a huge success. Here are the three reasons why it was a weekend not to be forgotten!

Fireside was held at Camp Walden in Bancroft, Ontario, over a 3 hour drive north-east of Toronto. As we drove down the pitch dark road on Friday night, and then started making out the warm lights of the camp and the fire through the forest ahead, we knew it was going to be a special weekend. Once parked, we were met with warm greetings, rather than a name badge and a swag bag of bad pens, and told to unplug – meaning no cell phones. A little bit of panic was quickly followed by a sigh of relief. A weekend with no phone calls, text, e-mails and social media? Yes please! And it was magical. Instead of thinking about our phones, we were completely focused on the newfound community around us. Fireside’s slogan after all, is “Disconnect to Connect”.

The range of companies and experiences of the people that attended was amazing. There were brand new startups, well-known successes, technology, media and investment firms, and us – a design firm that specializes in setting up flexible workspaces that address today’s needs yet allow for growth. However, everybody was an on even playing field, wanting to connect and hear each other’s stories regardless of their specialty or status.

On Saturday, we participated in an Early Stage Venture Mini Camp – a fireside chat all about the ins and outs of starting and running a brand new venture. The supportive, off-the-record atmosphere led to some candid discussion about mitigating early success and failure. In fact, people were more interested in hearing about each other’s challenges, rather than just the successes, and how to overcome them. It was refreshing because there was a willingness to learn and understand the how to deal with the punches and still get up and keep going. These shared stories and experiences were so inspiring.

Did we already mention that Fireside is held at a camp? The laid-back but energizing atmosphere from the beautiful setting, people involved, range of talks, to all the events in the evening, and oh yes, no cellphones, put everyone in a good mood. It was like being a kid again, except better!

Until next year, Fireside!

This author hasn't written their bio yet.
Maria Lee has contributed 11 entries to our website, so far.View entries by Maria Lee

Take a peek at this interview with Tim Ferriss on[...]

What I’m Looking At – Window Films

I relish the opportunity that’s presented with all those glass[...] 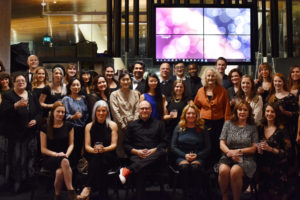 We're currently offline. Send us an email and we'll get back to you.

Type and press Enter to search